On Sunday, April 19th, I ran the Zoo Zoom 10k which helps fund the Sacramento Zoo. I decided to sign up at the last minute and since my cousin Aaron was in town from San Francisco, he joined me. I was a little nervous about this run because I over indulged the Friday and Saturday before the race. When I say over indulged I mean, I went kinda crazy.

I’m not much of a drinker (because I drank ridiculous amounts in college) and for some reason decided to drink Friday night when I went out with our family. Poor decision #1.  Around midnight that night, I also thought it would be a good idea to head to a local restaurant called Petra’s for a chicken pita, fries, and a soda. Poor decision #2. Petra is delicious but drinking and late night eating are never a good combination. Saturday morning instead of going on a run as planned, I walked over to Hot Italian for their breakfast pizza. Poor decision #3.  Now, I’m not saying that any of these things are poor decisions on any regular weekend. Enjoying a few drinks here and there along with delicious late-night eats is always fun. However, the weekend of a race-not so fun. My poor decisions one, two, and three, left me wondering if I should rename my blog “Running for Junk” instead.

On Sunday morning, I made sure we got to the race super early since Aaron hadn’t registered yet. I hate being late and not having enough time to visit the porta potties multiple times. The weather was perfect and we made it early enough to watch the animal costume contest as well as the start of the 5k race. 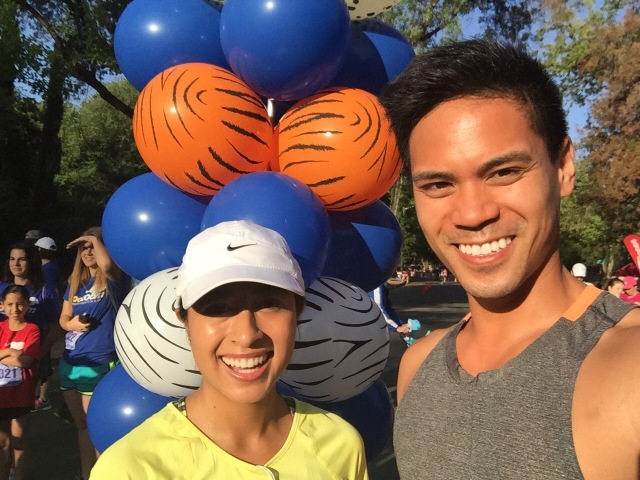 The picture above cracks me up because Aaron suggested I tilt my head back since I was wearing a hat-clearly, I didn’t get it. And what’s with my odd little grin? 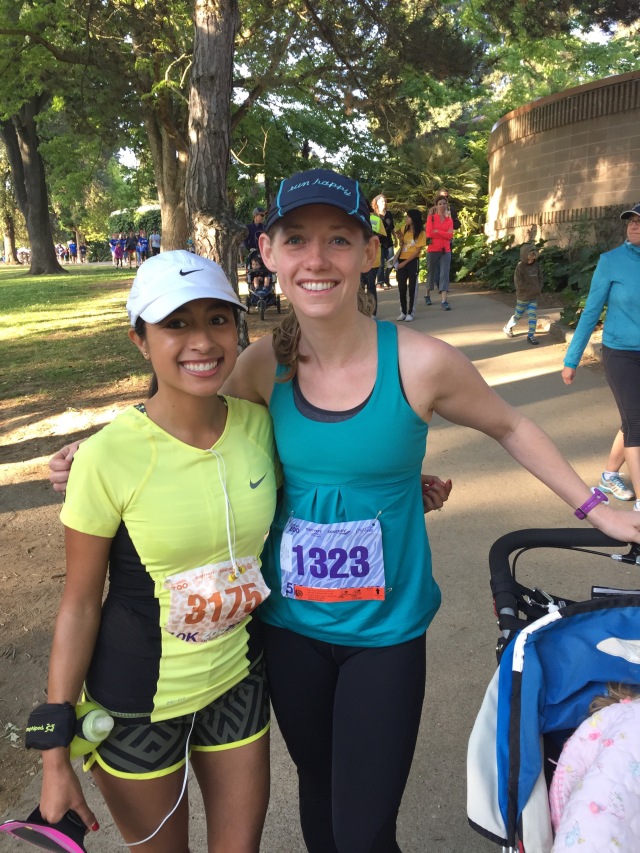 On our way to the car to drop off some of our personal items, we saw my running buddy Abby! She was running the 5k with her daughter Stella (who is in the stroller and was not feelin’ our photo op). Abby and I run together almost every weekend and it’s always a treat to see her, unexpectedly, at races. 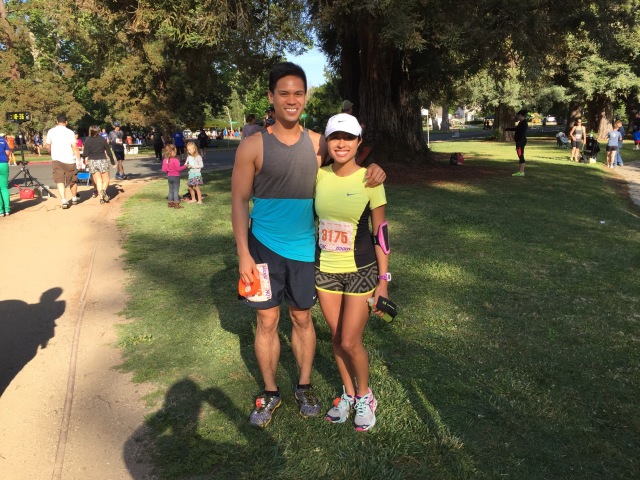 I have a pretty good idea of how fast my cousin runs since we’ve completed several races together (two half marathons in San Francisco and a Thanksgiving Day 10k). I really had no specific expectations for this race-I hadn’t set a goal. I just thought it would be a beautiful day, to spend time with my cousin, doing something we both love. We started the race together and I soon noticed we were running at a 7:50 min/mile pace.  I was really just trying to keep up with him. I think he was going at a “slower” pace to take it easy on me. Meanwhile, my little legs were working hard. I told Aaron with excitement (and shock) that if I stayed with him I may set a personal record. At that point, Aaron wanted to help keep me on track and continued to lead the way. He stayed about two steps ahead of me which kept me motivated. It was pretty funny that I decided not to wear my earphones because Aaron didn’t have a pair but we quickly realized that we were not really in the “talking and running” mood. We were FOCUSED!

I typically run with music but this day I focused on my breathing and soaking in every minute of the beauty that surrounded me. Running for me is a great time to reflect on my blessings. Many times while running I name all of the things/people I am thankful for and feel inspired to keep moving. 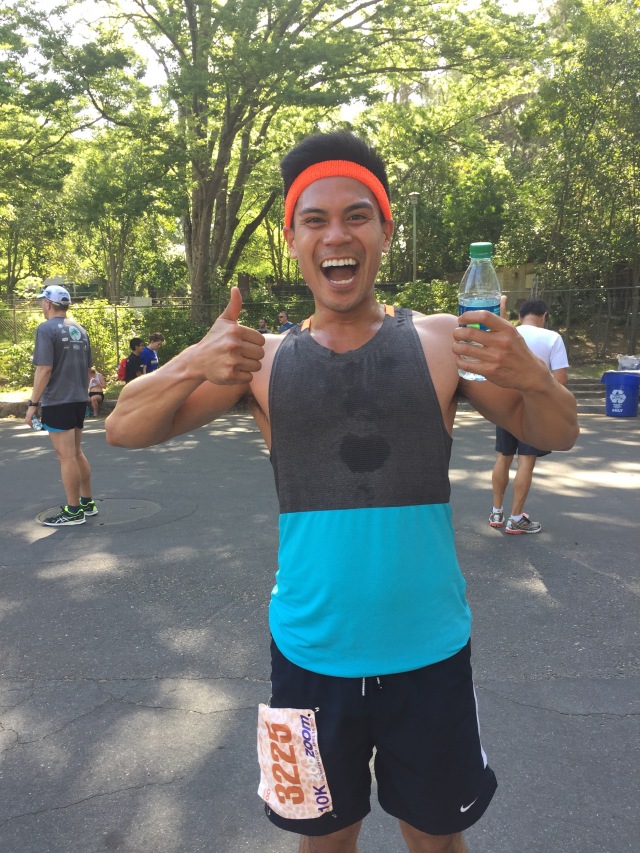 Overall the race was terrific! I got a PR for both my 5k and 10k.  Aaron and I couldn’t stop smiling and I literally could not thank him enough for motivating me. It’s a very rewarding feeling to finish a race strong. It made me realize that I run better and faster when I go into a run with zero expectations. After my last half marathon, I felt disappointed because I had not finished “fast enough”-which is silly I know, since I STILL completed 13.1 miles. I’m convinced that not setting any expectations for the ZooZoom and feeling relaxed and grateful, is why I was able to set personal records in both distances. 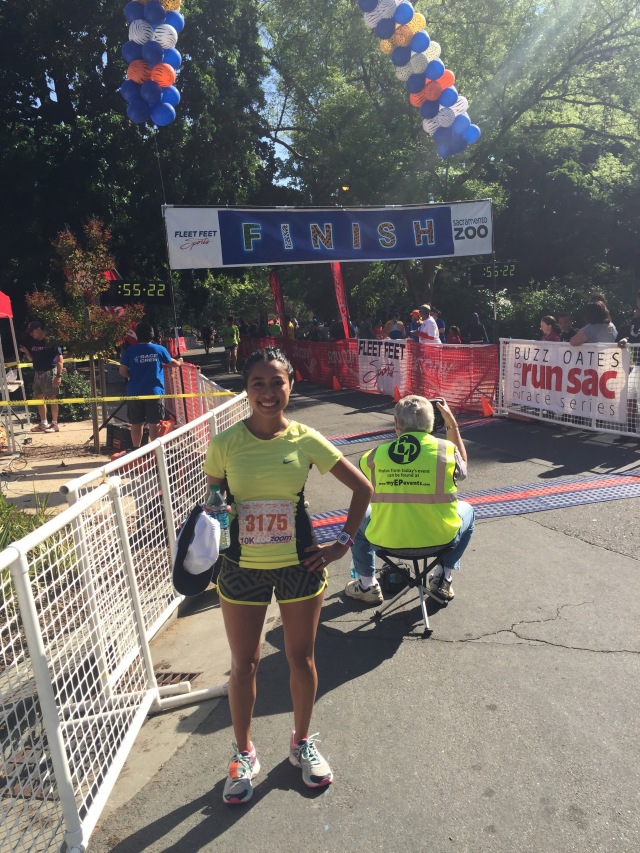 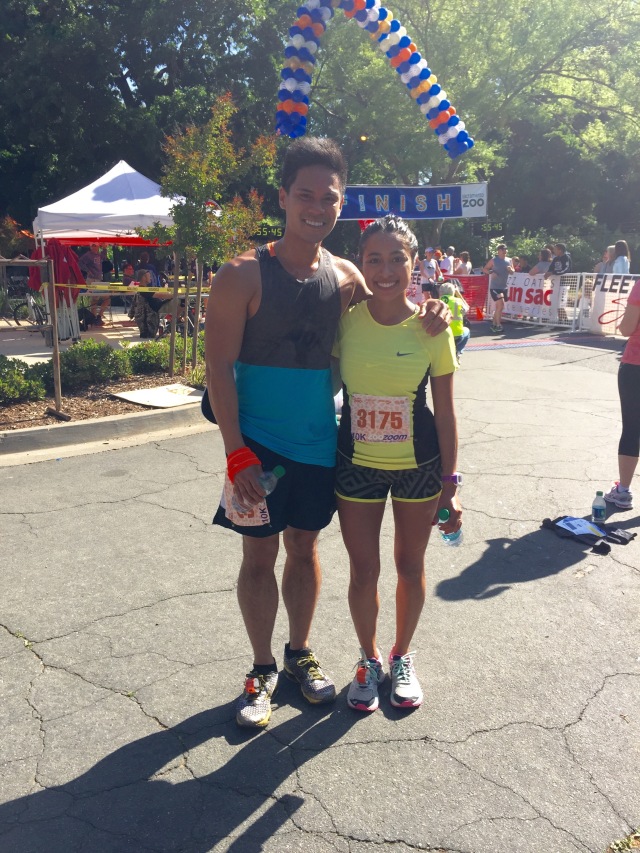 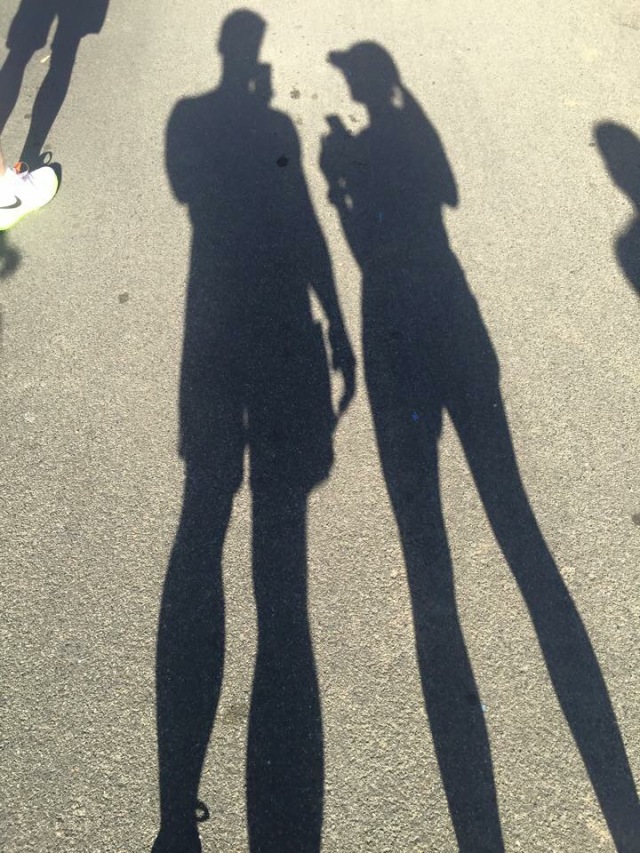 To my surprise I ended up placing 4th in my age group. I was shocked when I saw this! I started singing and dancing to Dan while we were driving. I’m in a tough age group: 25-29. It has really fast women and for once I was a part of that group. It felt good knowing that my hard work day in and day out is paying off. I wasn’t the fastest and know about a dozen people who can beat my time but I was still proud that I was able to achieve top 5 at a race. 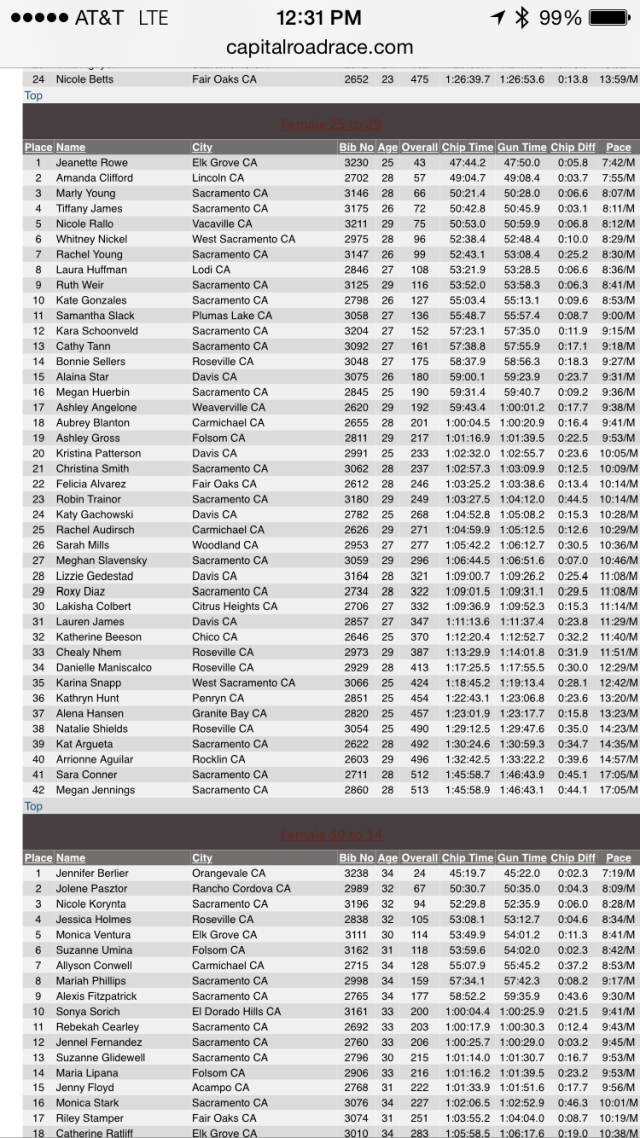 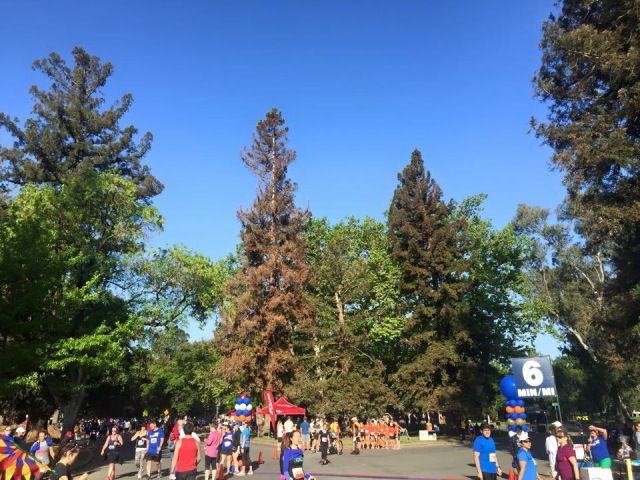 Later that evening, Dan and I went to a food trucks event for dinner-as a treat for my run. I ended up back at William Land Park where Sacto MoFo was hosting a food truck night. There was live music, bounce houses, picnic areas, and of course FOOD. I couldn’t decide what to eat-everything looked and sounded delicious!  We walked around in circles until I finally let my belly do all the talking and we decided on sea food. I ended up ordering a lobster roll. Back in my flight attendant days, everyone would rant and rave about lobster rolls (specifically the ones from Boston) and I wanted to see what all the fuss was about. Sadly, I was disappointed. Our meal cost about $35 and we were both still really hungry afterwards. Dan ordered cajun shrimp tacos. Poor guy was sadly disappointed as well. Even though our food truck experience wasn’t great we still had a good time chatting on the grass and enjoying the beautiful weather. I hope the lobster rolls in Boston are much better than the one I had.

I do a lot of self-reflecting on days when I run. Before the race, Aaron and I sat in the car and talked about what it felt like completing a marathon. We both agreed that it was the hardest thing we’ve ever done and our legs hurt in places we never knew could feel pain. Our conversation ended something like this:
Aaron: “I just feel like if I can do this…”
Me: “You can do anything?”
Aaron: “Exactly!”
Me: “Me too.”

I’m fortunate to have family and close friends who share my love for running. This feeling, both Aaron and I shared of accomplishment, will forever be embedded in my heart. I can apply it to any aspect of life and that’s one of the magical things about running. And ultimately, if I can do it, you can do it too. 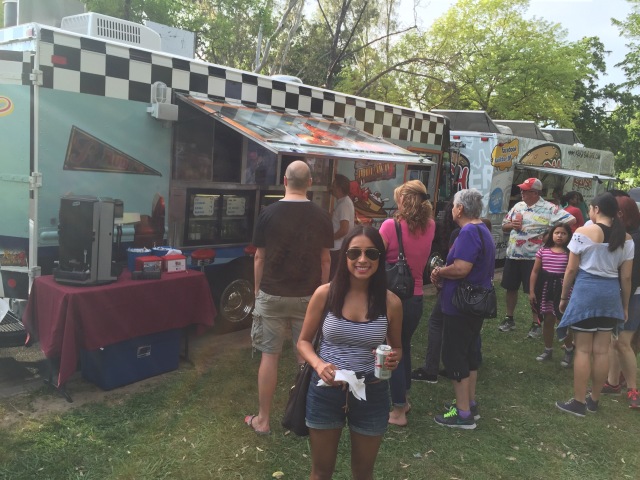 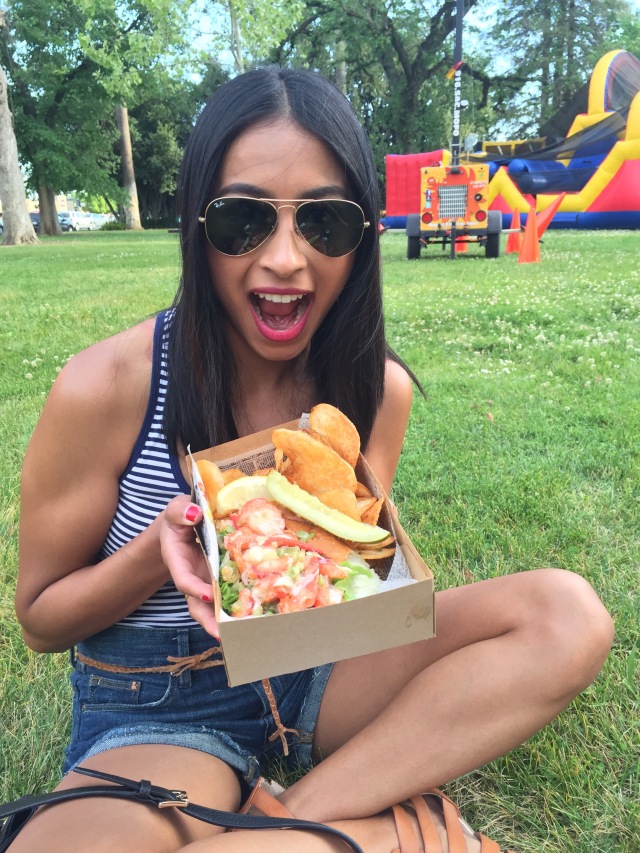 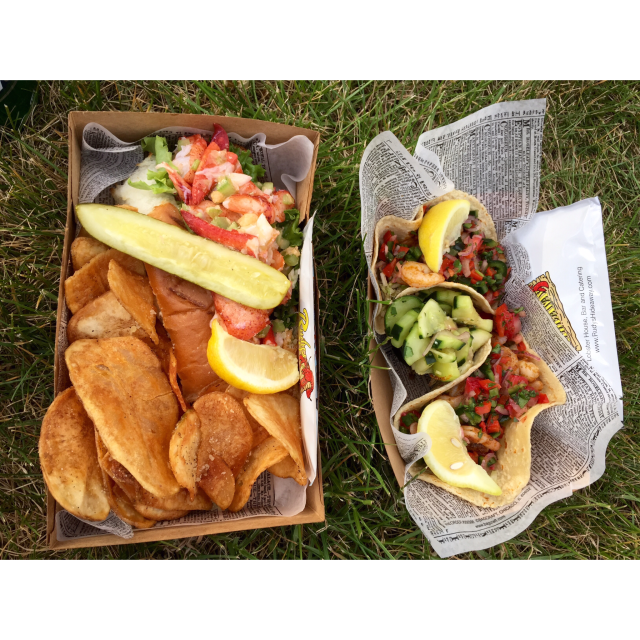 One thought on “Gotta keep up!” 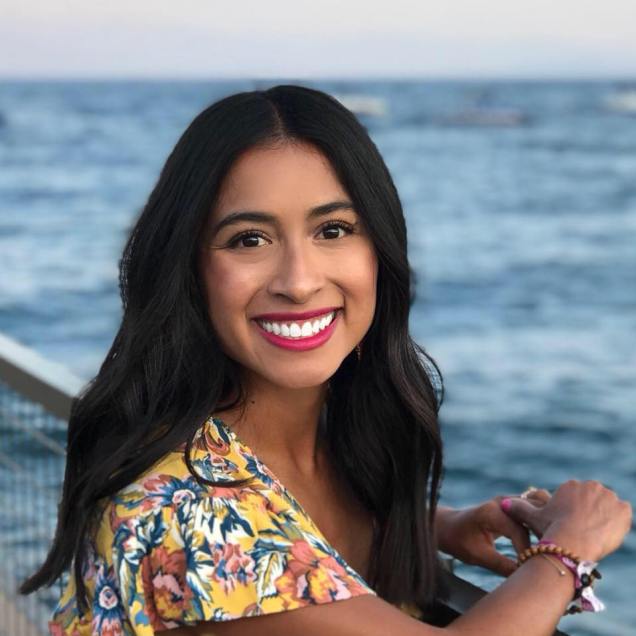